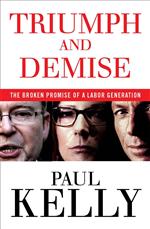 The Tragedy of the Mining Tax

Paul Kelly’s account, in his excellent new book Triumph and Demise, of how Labor bundled its mining tax makes for excruciating reading. It highlights the chaos, dysfunction and incompetence of the Rudd government that a tax, intended on spreading the benefits of the mining boom, could be so unpopular as to destroy a Prime Minister. That is exactly what happened.

At the heart of its failure was the lack of consultation between the Government and mining companies. Prime Minister Kevin Rudd and Treasurer Wayne Swan thought they had a political winner on their hands with a mining tax. They believed it was capable of coercing the mining companies into accepting a deal with the Government on Labor’s terms. This would require public support for the tax. It was not forthcoming.

Kelly argues that Labor had no intention of consulting them, even excluding Ferguson from the process. It was a classic example of Labor’s use of style over substance.

Kelly claims that they wanted a fight. Rudd, having shelved the ETS, and accused of lacking conviction, wanted to show he had backbone. However, Labor was not prepared for the angry opposition it would instigate.

The mining companies initiated at $25 million campaign opposing the tax. They argued it would severely hurt the industry, jobs, growth and the economy. No doubt they exaggerated these claims but as Kelly states, the mining tax was essentially a 40% new tax on our most important industry, how could it not hurt the economy?

Beneath the economics was the sentiment amongst mining companies that they were being treated with contempt, despite their consideration of having contributed significantly to Australian society. For example, BHP Billiton paid more tax than any other company in the country. Andrew Forrest was working with the government on a programme to aid Aboriginal children.

From the Government’s perspective, this was a David and Goliath struggle to ensure that regular Australians received their fair share. They would not be dictated to by vested interests and big business that selfishly wanted to rob many Australians of the benefits of a once in a generation mining boom.

Unfortunately for the Government, public sentiment was with the miners. According to Newspoll only 28% of the public supported the tax with 48% opposed to it.

For the opposition, it was a gift. Rudd had months earlier shelved the ETS as Tony Abbott’s campaign against the ‘great new tax on everything’ gained traction. Now he was announcing another ‘great new tax’ this time on Australia’s most important industry. Abbott went to town on the issue, as did the rest of the Liberals and Nationals, who couldn’t believe their luck.

To top it all off, Rudd and Swan failed to consult with the states, which technically owned the mining resources. They had been left out of the details and feared losing their royalties. They too would join in the opposition to the tax.

Labor was fighting a war on three fronts, with public sentiment firmly against them. It wasn’t that the public opposed having a mining tax but rather opposed the truly archaic process of its implementation. It fed into the growing narrative of chaos and dysfunction surrounding Rudd and his government.

Kelly argues that the mining tax would be the dagger in the heart of Rudd’s leadership. It was the moment that Rudd lost the support of a large part of his caucus, notably his deputy Prime Minister. The rest, as they say, is history.